Two leading US defence contractors have reported sales pressures even as the war in Ukraine boosts demand for their weaponry, with production hamstrung by shortages of parts and labour.

Raytheon, which manufactures the Stinger missile used by Ukrainian soldiers fighting Russian forces, on Tuesday reported sales in its missile and defence division fell by 11 per cent to $3.6bn in the second quarter compared to the same period of 2021. It also trimmed the division’s sales and profit outlook for the year.

The announcement came a week after Lockheed Martin, which jointly produces the Javelin missile with Raytheon, lowered its revenue outlook for 2022 by $750mn to $65.25bn, mostly due to supply and labour pressures in its aeronautics division.

The defence industry is preparing for an influx of orders as governments increase military spending following Russia’s invasion of Ukraine. Western governments are seeking to replenish stockpiles of weapons they are providing to Kyiv while bolstering their own arsenals.

The demand — including the Pentagon’s first Stinger order in two decades, for 1,300 missiles worth $662mn — has collided with historic tightness in US labour markets and shortages of components such as computer chips and rocket motors. Raytheon’s missile and defence division had $4.5bn in bookings in the second quarter.

“We’re certainly not satisfied with the performance in our defence business this quarter. There is much to do. Bookings were outstanding; execution, not so much,” Raytheon chief executive Greg Hayes told analysts during an earnings call on Tuesday.

“We have been, I would say, caught off guard a little bit by how much pressure there is in the supply chain,” particularly for labour, Hayes added. Raytheon shares were down 3.5 per cent at $91.27 on Tuesday.

Raytheon and Lockheed have said they have been unable to recoup ground lost to employee absences in early 2022, when infections from the Omicron coronavirus variant were surging. Neither expects labour and supply chain issues to be resolved this year.

“While we’ve seen improvement in . . . our operations, we still have yet to figure out how to recover what was lost,” Jay Malave, Lockheed’s chief financial officer, told the Financial Times.

In its earnings, Lockheed posted a $945mn drop in sales of its marquee F-35 fighter jet, with supply chain problems responsible for $600mn of the fall. 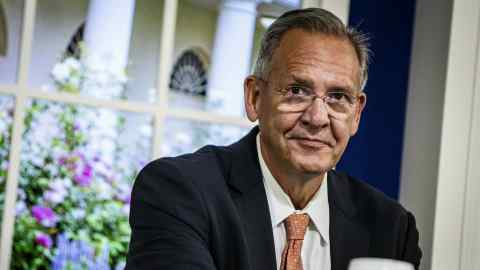 Normally, all the parts needed in Raytheon’s plants are present and ready to be assembled 90 to 95 per cent of the time. But in the second quarter, availability fell to 50 per cent because of supply chain constraints, Hayes said.

Despite the hit to its defence business, Raytheon reaffirmed full-year revenue guidance of $67.75bn to $68.75bn as a recovery in summer air travel boosted demand within its commercial jet engines and parts businesses. Raytheon reported quarterly net profit of $1.3bn, up 25 per cent from the same period of 2021, resulting in earnings of 88 cents a share, missing analyst estimates of 92 cents, as polled by Refinitiv.

Raytheon and Lockheed remained bullish on sales in the long term as western governments place more orders. Hayes said that the US government has signalled further interest for Stingers, Javelins, Tomahawk cruise missiles and the Next Generation Jammer, an electronic attack system. Poland has asked for accelerated delivery of Patriot missile batteries.

Hackers, Hoodies, and Helmets: Technology and the changing